The legends of Mermaids have long been discounted by modern-day society, they exist only in folklore and fairytale’s. Perhaps they never really existed, but maybe, just maybe… there is truth to those stories.

Some believe Mermaid’s are aliens, coming to us through a wormhole; others, that they are a bad omen – set out to lure men of the sea to their death, and then, the most popular are the tales of a half fish-half woman creature sitting upon the rocks and shores brushing her lavish long hair while singing to her God Neptune in angelic, hypnotic voice. These tales claim that Mermaid’s had a kind demeanor and saved many men from an uncertain fate.

Believer or not, the conundrum of a Mermaid is nothing shy of fascinating.

It is said that a Mermaid’s complexion is pale and their skin is flecked with shimmery scales. Though you may not notice this as they tend to cover themselves with their wonderous hair.

Mermaids feed on small fish and kelp. I once asked my Mermaid what she ate when she lived in the ocean and her response then and now has always remained the same. “Little fishes!” She is adamant that at no time did she ever eat crab, seahorses or big fish – only “little fishes!”

Coming from the sea Mermaid’s require hydration so their need for water is their biggest weakness. I read once that while in human form they donned webbed hands and feet.

Aquamarine, known as the “gem of the sea” is spoke of in legends to be tears of Mermaid’s that hold the power to keep sailors safe at sea. Others claim it was the sacred stone of Neptune, washed upon shore as a gift from the God’s.

Mermaid’s have the ability to control basic elements and weather, they can transform into smaller mammals and even fade away becoming invisible. They love to be free but it is said that they grow lonely and have no power of their need for love. Its is believed that this need to be loved is what brings them to the surface. Watching men from afar feeding their curiosity. during shipwrecks and storms they would save men and it is then, that they would fall in love with humans.

Ok, so maybe the idea of a half Victoria’s secret model – half tuna, lounging on the jetty stalking pirates is a bit far-fetched, but I will tell you this – something that has the ability to cry pricey gemstones and part the seas receives a glimmer of my belief. Let’s face it, I have no intentions of meeting my own uncertain fate for doubting her being.

Fact or fiction the idea of my baby once being a Mermaid has brought light to an otherwise dark subject.

As Mermaid and her lifelong pal go through life maneuvering their oddities of scales and webbed feet, they are bound to face struggles. Perhaps struggles of pain, itching and surgery, or perhaps bigger ones. The need to hide their gifts, feeling different or being teased. Together, we will face those struggles as we are faced with them. For now, if only for a while, I can enjoy my Mermaid embracing her sea life. When she tells me stories about eating “little fishes” and swimming so fast with her tail, I will smile. If she believes her scales will disappear if she doesn’t take a bath or use her special soap – I believe it too. 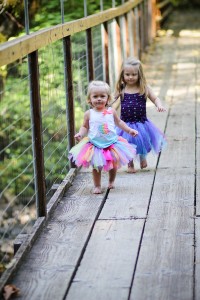 I recently had the pleasure of a local photographer,  who I now call friend, take interest in my blog. She generously spent a day with us, a close friend of ours and our little blessings taking pictures. Here’s the ringer – not only did she arrive at the location but brought a second photographer and a wooden sign she had purchased then had designed by another source. Her genuine desire to help raise awareness is beyond appreciated.

I cried driving home that day. I had to leave rather abruptly as Mermaid needed a nap in the biggest of ways so I never really got a chance to tell everyone what they did for me.

I choke up as I write this in a happy, humbled way. You see, time has proven that Mermaid’s case is far less severe than it could have been and our journey thus far has been relatively easy. I could stop writing about it and be satisfied with how far we have come, but I have to remember why I started this. I remember how I felt after first learning of her disease and the sense of loneliness. I remember that I longed for someone to tell me it was going to be ok. I can not tell everyone its going to be ok, because the truth is, for some, it might not. I can not think that a cute little blip about a mythical creature will warm your heart, but I can show you, through this encounter that people you would never expect to care, do. For 4 Women to lend their talents, oddities and identities to our purpose, I thank them.

You have assisted in one small step towards teaching the world about nevus owners.

I thank you for seeing our vision and letting these two little girls be portrayed as fierce, powerful Mermaid’s, if only for a day.

So today, Kinna Clark, Geneva Richardson, Coleen Papike-Robbins and Andi Hakanson, you are our honorary Mermaid’s. May you find freedom in the seas!

To see more work by Kinna Clark go to: