All the stories I have shared about other people thus far, have been about fellow Nevus owners. It’s true, no ONE story is alike, nevus has a mind of it’s own and presents in so many different ways that each individuals experience looks different. We cannot say that what someone is feeling or seeing happen is right or wrong because the reality is, we just don’t know.

Meet Vicki, a lover of music, all genres but especially reggae, a singer, and a Pittsburgh Steelers fan from the East Coast. A beautiful Woman that as a child, played Pop Warner football and helps to lead the children’s choir at her church. Where Vicki has not “officially” been diagnosed with a form of nevus she has struggled for years with a debilitating skin condition that presents in many ways as ILVEN. She has faced other health challenges on her journey that she openly shared with me. 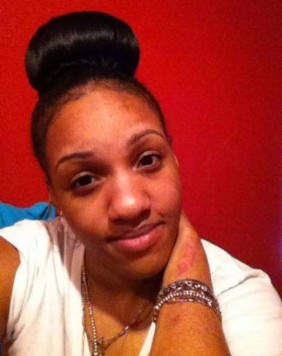 Vicki remembers from a young age, 5 or 6, having spots on her left fingers and palm. Visits at both the Pediatrician and Dermatologist led to treatments with liquid nitrogen as they all thought her spots were warts. Vicki knew, even as a child, that they were not warts. It got to the point she would cry and beg her Mother not to go back because it hurt so bad. As Vicki got older, her skin condition got worse and more symptoms began to arise. Currently both sides bare her condition. She has it in her hair, side of face, both ears, neck, back, buttock and bottom of her right foot.

Throughout her life Vicki has endured 5 biopsies, all of which have failed to pinpoint her exact condition. She has been treated with Humira for psoriasis, which made her extremely ill and despite the negative biopsies one physician insists this is indeed ILVEN. She has been to John Hopkins and hopes to return one day for more answers. The growth on her foot causes severe pain. It hinders her from walking and wanting to do the things she loves to do in life. In Vicki’s words “My skin itches, stings, blisters, bleeds and causes pain to touch it. When I shower the water hurts touching my body.” 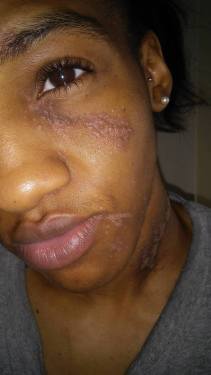 In addition to the skin disease Vicki has been diagnosed with a Rathke Cleft Cyst. A Rathke Cleft Cyst is a benign growth found on the pituitary gland in the brain. Typically RCC’s are asymptomatic but occasionally, if it grows large enough, it can cause visual disturbances, pituitary dysfunction and headaches. RCC’s are seen on MRI’s or CT’s of the brain. She has been told that her RCC will need to be monitored for the remainder of her life.

Between the possible ILVEN, Auto immune disease, Positive ANA, and RCC Vicki has had a rough time with her daily life. She has been struggling with depression and anxiety for quite some time. A once active vibrant being who was attending college, singing in the choir and happy; now says that she cries at the drop of a hat, lives life in pain and is full of anger and frustration at the fact that despite all her visits to the Dr. and multiple symptoms, nobody can seem to give her an official diagnosis. Her Pediatrician, who she saw until age 21, made the decision that she should stop attending college. She had missed a lot of class due to ER & Dr. visits, was falling behind and suffering daily with joint pain as she traveled from class to class making her late and aiding in her emotional instability.

Vicki’s biggest challenge is that she has a variety of symptoms that may or may not be connected to one another. The majority of us in our support group have an official diagnosis, though any form of nevus can certainly follow its own set of rules, it offers us a sense of relief to know exactly what it is that we are up against. I sympathize with her lack of certainty.

So how does Vicki cope? When she was about 22 she began using occasional marijuana. Her Doctors are aware of this choice and she states that it allows her to forget about “Everything” and manage her pain. I understand that this can become controversial but it is important for everyone reading this to understand that Vicki is coming from a place of struggle. I live in a very liberal state where this is normal for me to see on a daily basis. Living in pain and lacking the ability to enjoy life often leads us to any form of relief. Traditional medicine has failed to provide results at this time though she intends to follow-up with a Psychiatrist at some point and potentially start a medication regimen for the Mental Health side of things, but that is down the road. In the meantime she copes how she can, and knows how too with the support of her Physicians, family and friends. She continues to attend church and assist with the choir, something that has brought her joy since childhood.

Vicki’s case is complicated and rare, many physicians are led to a dead-end but it has not stopped her from pushing forward to find answers.

Vicki told me that she has 2 goals in life… first, to bring awareness around the World to invisible diseases. She wants to educate people to understand that not every disease requires a wheelchair, people with “invisible diseases” often get overlooked. She would also like to travel and hopes to one day be in a place both physically and mentally to see these dreams come true.

She recognizes that bad days will happen and the only way she will feel good during those times is to surround herself with positive people.

It’s human nature to fear the unknown, I for one struggle with “surprises” or not having a plan on a daily basis. Where some people thrive in going with the flow, I need structure and answers. I cannot even begin to imagine a life full of medical mysteries with little to no answers.

As the famous Lauren Hill once said:

“We can’t plan life. All we can do is be available for it.”

Vicki’s story brings to light an issue our society shys away from and I respect her willingness to let me share it, you may or may not know, that I work in Mental Health. I hear people day in and day out feel ashamed that they came to see us or express their families discontent with admitting any sort of psychological discord. It’s shameful to me that we still live in a world where Psychological concerns are not treated as openly and regularly as Physical ones. From day one my biggest concern about Mermaid’s disease was how she would handle it emotionally. Would this disease in any way, shape or form dictate her daily happiness or prevent her from doing things “normal people” do.

To me, with everything Vicki has endured, the most important one to speak about is the emotional effects. The reality is that we are dealing with an incurable disease, one day Vicki may get that official diagnoses confirming some form of nevus and we can share remedies we have used to ease the discomfort; but for now, we cannot cure it. Diagnosis or not, it sure presents as many others I have seen. I want to see us having more conversations about the emotional effects and aiding eachother in the healing of our souls. Afterall, we heal from the inside out.

Tonight both Vicki and I prescribe all our fellow nevus owners a dose of Reggae, listen to her current favorite song, “I’ll take you there” by Vybz Kartel and know you have friends from across our great country wishing you all the best.

Tonight Vicki, you are an Honorary Mermaid, Thank you for being so candid with me and sharing your story, where these stories are just small blips into the struggles one lives with on a daily basis they serve as a reminder that we are all human and our skin will not define us. You  are brave and helping us to forge a road of acceptance.

A few weeks ago Mermaid was playing on the floor and her arm looked dirty, I asked her if she had been outside and what she had gotten into, as I got closer, I realized it wasn’t dirt at all, but Nevus. Then today, after bath time, I noticed even more changes and thickening. It seems as though overnight her Nevus has completely morphed.

I put together some comparisons and when I looked at our pictures from the first year, it amazed me that I was so upset, it seems so minor compared to now.

I have always hoped and prayed that Mermaid’s Nevus would not continue to spread, as I am sure all of us effected by Nevus have, but I knew deep down inside, that it would. I just didn’t expect it to happen so fast.

Mermaid now has a more prominent line from under her arm to her wrist, new growth on her hand, top & bottom (which is the one I fear will require surgery) and thickening on both her elbow and underarm.

Here are few of the changes… 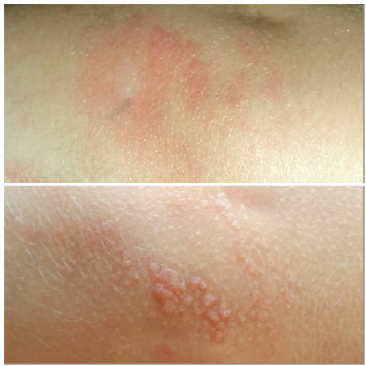 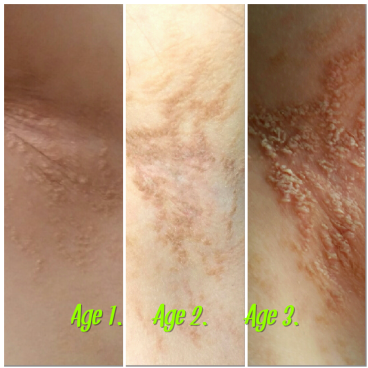 We have a dermatology appointment coming up and I will certainly be asking for more information about possible triggers that stimulate growth.

We have added some new pictures under the photos tab of both Mermaid’s Nevus and a friend’s. The progression is interesting to see.

Coming up this week we will have a story about a fellow member of our ILVEN support group so keep your eyes open.